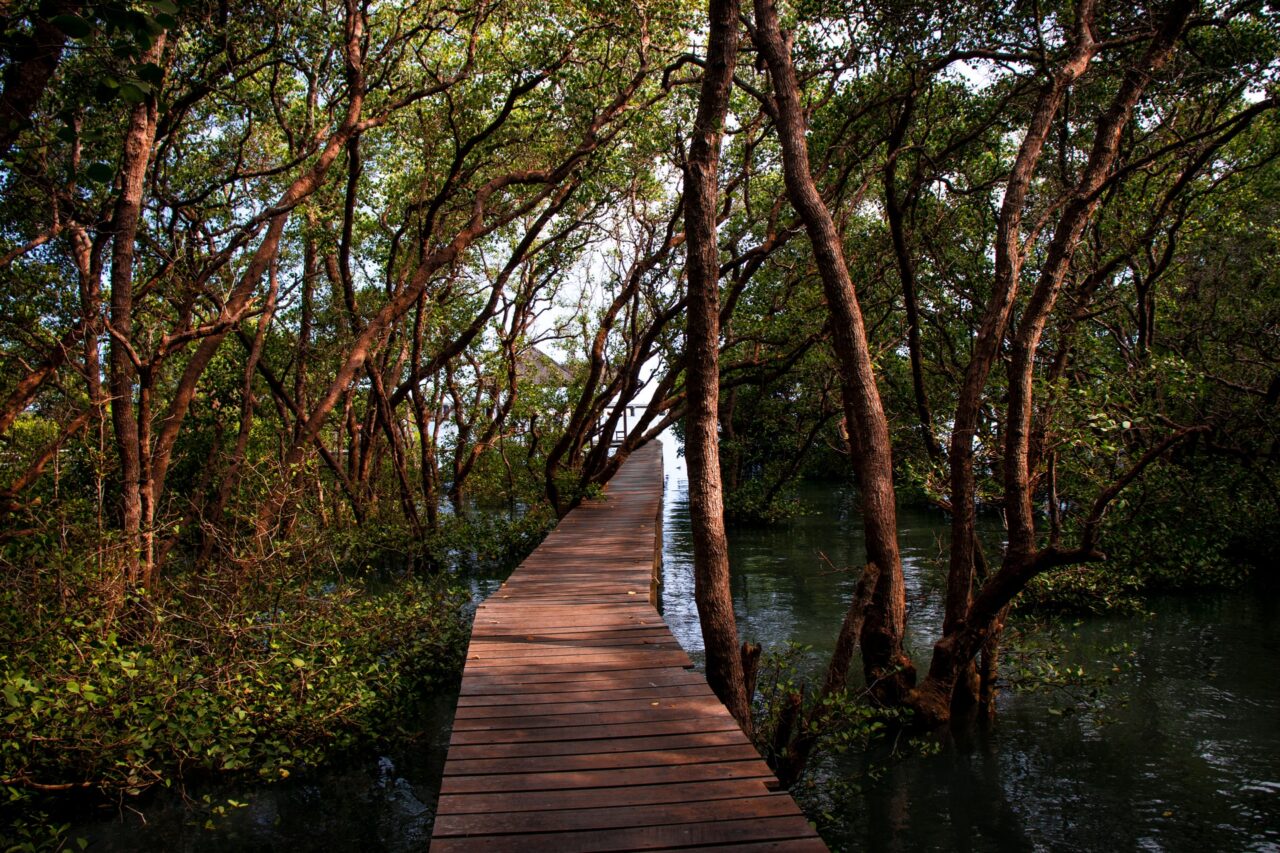 It’s hard to miss the dense green foliage that hugs most of Florida’s coastline. The mangrove forests quietly guarding the shores are not only beautiful but extremely hardworking. Mangrove trees are benevolent, hardy, and serious multi-taskers, providing a plethora of benefits for Florida’s coastal areas.

These lush beauties and their near-impenetrable, dense root systems offer protection to populated areas in their proximity by preventing erosion.  This intricate system encourages sediment deposits by slowing water flows with their above-ground roots.

The mangrove root system also filters phosphates, nitrates, and other contaminants from the water. This filtering system improves the water quality of streams and rivers flowing into the ocean, which in turn ensures the health of many marine species such as fish, mammals, birds, plants, shrimp, crabs.

Coastal wading birds including egrets, herons, cormorants, and roseate spoonbills, and they are completely dependent on these forests. Manatees, sea turtles, Key Deer, and the Florida panther all maintain a symbiotic relationship with mangroves at some point in their life cycle.

It is also estimated that 75% of South Florida’s game fish and 90% of commercial fish species rely on the mangrove system for their survival.

This natural infrastructure also has the innate ability to absorb the impact of destructive storm surges during hurricane season.

Mangrove forests are also responsible for absorbing huge amounts of carbon dioxide emissions as well as greenhouse gases from the atmosphere. The gases are trapped and stored in the flooded soils for hundreds of years. These trapped gases are called “blue carbon” since they are trapped underwater in these coastal ecosystems.

There are three types of mangrove species native to Florida:

All three species thrive in the salty shores of Florida’s coastal regions in abundance.

The red mangrove’s roots effortlessly purge the salt from the ocean, turning the brackish water into a haven of freshwater for many species. The roots also provide natural fish hatcheries and a vital habitat for reptiles and birds. These amazing trees are also a boon to property owners, as they buffer and stabilize shorelines during storms.

The black mangrove populates the upland areas, close to the high tide line. Its root system protrudes up from the ground in a spiky carpet, allowing oxygen to penetrate the roots. This spiky root system also ensures protection during a bad weather event. The leaves of the black mangrove extract sea salt from the water, thus forming salt crystals on their underside.

The white mangrove thrives further upland from the red and black varieties. It has the appearance of a regular upland tree, although some white mangrove forests resemble a shrub-like community.

These friendly, magnanimous trees are vital to Florida’s coastline and all its diverse marine life, not to mention the safety of its human inhabitants.

There are many threats to mangrove forests, including pollution, dredging, and land development. Removal of these forests will result in the release of gargantuan amounts of carbon dioxide into the atmosphere. Their disappearance will also contribute to erosion and the destruction of coastal areas.

The vast importance of maintaining these forests is detailed in this study from scientists in the conservation sectors entitled Valuing The Flood Risk Reduction Benefits of Florida’s Mangroves,. This study concludes that Florida mangrove forests prevented $1.5 billion in storm-surge flooding, and protected the lives of over half a million people during 2017’s Hurricane Irma. The study also indicates that damages were reduced by 25% in counties with mangrove forests.

These magical mangrove forests also provide refuge for nature-loving humans and allow them to enjoy fishing, birding, paddle boarding and kayaking, and most importantly, peace of mind and relaxation.

If you have these trees on your property and you want them pruned or trimmed, call Tree Masters for information and/or assistance in the maintenance of your mangroves.

previous
What is a certified arborist? What do arborists do?
next
Live Christmas trees: buying, care, and replanting